3D
Scan The World
2,113 views 84 downloads
1 collection
Community Prints Add your picture
Be the first to share a picture of this printed object
0 comments

W. E. Gladstone was a liberal politician and four times prime minister. He was born at 62 Rodney Street, Liverpool in 1809, the son of a Scottish merchant Sir John Gladstone. He grew up in Seaforth Village before attending Eton and Oxford University. His extensive political career included two term as Chancellor of the Exchequer. He also holds the record for most terms as British prime minister.

This bronze bust was commissioned as part of the SEAGLAM project, which raised the profile of Seaforth Village. SEAGLAM have created a memorial to Gladstone in the grounds of the Church of Our Lady, Seaforth. 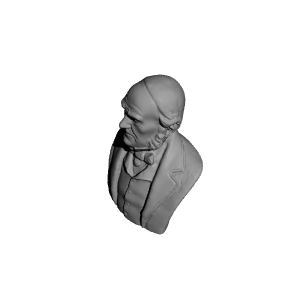