3D
Scan The World
3,296 views 281 downloads
5 collections
Community Prints Add your picture
Be the first to share a picture of this printed object
0 comments

This is one of a pair of guardian figures that flanked one of the entrances into the throne room of Ashurnasirpal II (883-859 BC). Stone mythological guardians, sculpted in relief or in the round, were often placed at gateways to ancient Mesopotamian palaces, to protect them from demonic forces. They were known to the Assyrians as lamassu. This winged lion has five legs so that when viewed from the front it is standing firm, and when viewed from the side it appears to be striding forward against any evil. It wears ropes like other protective spirits. Between the legs is inscribed the 'Standard Inscription' of Ashurnasirpal which is repeated over many of his reliefs. It records the king's titles, ancestry and achievements.

This colossal figure was excavated by Austen Henry Layard who worked in Assyria between 1845 and 1851. He suggested that these composite creatures embodied the strength of the lion, the swiftness of birds indicated by the wings, and the intelligence of the human head. The helmet with horns indicates the creature's divinity. 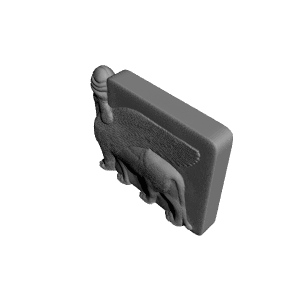 ×
5 collections where you can find Winged Lion at The British Museum, London by Scan The World