3D
Scan The World
2,982 views 164 downloads
2 collections
Community Prints Add your picture
Be the first to share a picture of this printed object
0 comments

Laurens was a pre-eminent Cubist sculpture and was closely associated with Pablo Picasso and Georges Braque in Paris at the beginning of the twentieth century. Laurens trained as a stonemason, immersing himself in the French traditions of stone carving. Woman Arranging Her Hair is a work of his maturity, carved nearly thirty years after he first concentrated on the female nude. The angles of the rounded body and exaggerated limbs depart from Classical ideals but create their own form of sculpture beauty. 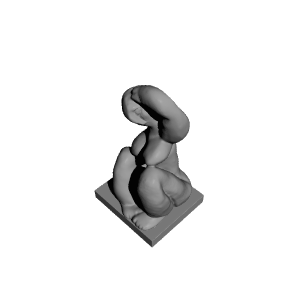