3D
Scan The World
5,215 views 338 downloads
Community Prints Add your picture
Be the first to share a picture of this printed object
0 comments

Despite its beauty, little is known about the whereabouts and history of this sculpture. The larger than life piece, intricately carved in marble was presumably made in the 1400s at around the same time as Michelangelo and the birth of the Renaissance. It depicts a female figure, supposedly a labourer and maybe the same figure as Jean Auguste Dominique Ingres's 'The Source', holding a jug over her shoulder with the fabric of her dress between the fingers in her right hand. It is currently on display at the Louvre in Paris. 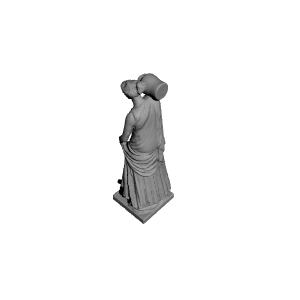 ×
0 collections where you can find Anchyrrohée or Terpsichore at The Louvre, Paris by Scan The World