Woman with a Tiara

3D
Scan The World
1,242 views 66 downloads
Community Prints Add your picture
Be the first to share a picture of this printed object
0 comments

Woman with a Tiara

H. Rachou, 1912, No. 54 ter: "Grandeur nature, wavy hair crowned with a stéphanè.Crisée at the lower part of the neck, it is mounted on a modern marble pedestal.It is intact, except a break, repaired plaster, at the end of the nose, it is believed to have been taken up again in the eighteenth century." 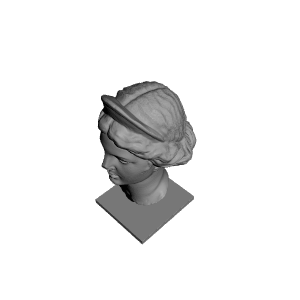