3D
Scan The World
3,304 views 355 downloads
1 collection
Community Prints Add your picture
Be the first to share a picture of this printed object
0 comments

Baratta came from a family of sculptors that originated in Carrara. Pietro was active in Venice and his most famous work is the elaborate Brandolin monument (1708) in the church of Cison di Valmarino. He travelled to Rome in 1710, executed works for the Udine Cathedral and a large group of busts and statues for Peter the Great, many of which are still in Russia. He returned to Carrara about two years before his death.

The bust is typical of late 17th - early 18th century Venetian art and indeed other sculptures by the hands of Baroque artists active in Venice such as Orazio Marinali (1643-1720) offer close analogies. Artists of that generation were influenced by the work of Giusto le Court (1627-1679), a Flemish sculptor who spent some time in Rome before moving to Venice in the middle of the 17th century. There he revived the local tradition for sculpture which had fallen into decline and introduced the Baroque style with theatrical inflexions and vigorous modeling. A pair of busts by Marinali now in the Ponce Museum, Puerto Rico as well as the Bust of a man thought to represent Heraclitus in the Victoria and Albert Museum, London, also by Marinali, can be compared to our busts in their typology but also in the treatment of the marble. They show bearded men in truncated busts, their heads turned to one side and their mouths half-open, in the case of Heraclitus the drapery covers part of the head. Such portraits are thought to have formed part of cycles with busts of philosophers made for villas in the Veneto. Stylistically, the pair is close to two other sculptures by Baratta, Saint Joseph and Saint Anne in the church of Saint Sebastian, which present a similar treatment of the drapery with deep folds creating sharp angles. The bust of Heraclitus is also reminiscent of the Allegory of Winter by Baratta in the Summer Garden, Saint Petersburg. 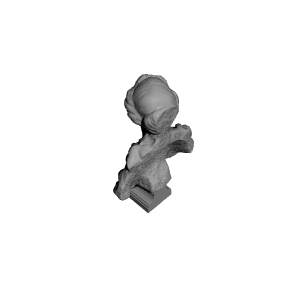