3D
Support Free Scan The World
4,315 views 150 downloads
2 collections
Community Prints Add your picture
Be the first to share a picture of this printed object
0 comments

The Women of World War II Memorial, Whitehall, London On 9 July 2005 Her Majesty The Queen unveiled The Memorial to the Women of World War Two. The bronze sculpture stands next to The Cenotaph in Whitehall, one of the most important ceremonial routes in the nation. The Memorial is a permanent tribute to the contribution made by more than seven million women during 1939  45 and it took seven years of campaigning for a hope to become reality. Significantly, almost every family in Britain knows a woman this memorial represents. 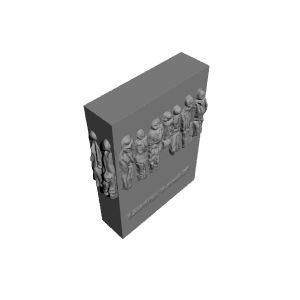 ×
2 collections where you can find Women of World War II Memorial in Whitehall, London by Scan The World