3D
Scan The World
1,092 views 41 downloads
Community Prints Add your picture
Be the first to share a picture of this printed object
0 comments

This wooden pig toy was recovered by the James Madioson’s Montpelier archaeology team at the Gilmore Cabin site (https://www.virginia.org/listings/HistoricSites/GilmoreCabinandFreedmansFarmatJamesMadisonsMontpelier/) in a deposit that dates to the late 19th or early 20th century. It was found with two other wooden toys and may have been part of a Noah’s Ark play set. It was 3D scanned with a NextEngine Desktop 3D scanner on June 5, 2017. 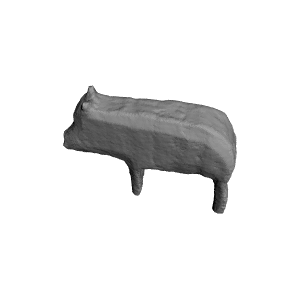 ×
0 collections where you can find Wooden pig toy by VCL