Worker and Kolkhoz Woman(Russian: Рабо́чий и колхо́зница) is a sculpture of two figures with a sickle and a hammer raised over their heads. It is 24.5 meters (78 feet) high, made from stainless steel by Vera Mukhina for the 1937 World's Fair in Paris, and subsequently moved to Moscow. The sculpture is an example of the socialist realistic style, as well as Art Deco style. The worker holds aloft a hammer and the kolkhoz woman a sickle to form the hammer and sickle symbol.

The sculpture was originally created to crown the Soviet pavilion of the World's Fair. The organizers had placed the Soviet and German pavilions facing each other across the main pedestrian boulevard at the Trocadéro on the north bank of the Seine.

Mukhina was inspired by her study of the classical Harmodius and Aristogeiton, the Victory of Samothrace and La Marseillaise, François Rude's sculptural group for the Arc de Triomphe, to bring a monumental composition of socialist realist confidence to the heart of Paris. The symbolism of the two figures striding from West to East, as determined by the layout of the pavilion, was also not lost on the spectators.

Mukhina said that her sculpture was intended "to continue the idea inherent in the building, and this sculpture was to be an inseparable part of the whole structure", but after the fair, the Rabochiy i Kolkhoznitsa was relocated to Moscow where it was placed just outside the All-Russia Exhibition Centre.

In 1941, the sculpture earned Mukhina one of the initial batch of Stalin Prizes.

The sculpture was removed for restoration in autumn of 2003 in preparation for Expo 2010. The original plan was for it to return in 2005, but because the World's Fair was not awarded to Moscow but to Shanghai, the restoration process was hampered by financial problems and re-installation was delayed. See photographs of the disassembled statue. 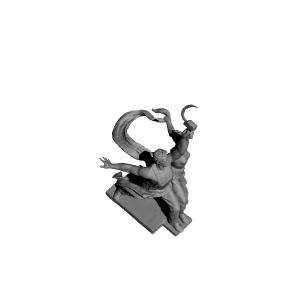 ×
27 collections where you can find Worker and Kolkhoz Woman by Scan The World
×
Jose
@josesote
2
Posted at: 12th May 2020

Thanks! I printed it and it came out fantastic! Material ABS, 15%infill, 0.2.