The Amazons were female warriors that lived in Anatolia around 2,000 BC. They are believed to be the daughters of the god of war, Ares, and Harmonia.

Pliny the Elder records five bronze statues of Amazons in the Artemision of Ephesus. He explains the existence of such a quantity of sculptures on the same theme in the same place by describing a 5th-century BC competition between the artists Polykleitos, Phidias, Kresilas, Kydon and Phradmon.

The winner of the competition was Polyclitus' version, believed to be the Amazon Sciarra type.

The original of this work, housed in the Pio-Clementino Museum (Vatican) was discovered in 1770 and is known as the Mattei Amazon, after the family that once owned it. The Mattei type is undisputedly believed to be sculpted by Phidias. 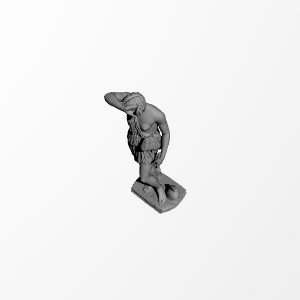