Wounded Cupid at The Nye Carlsberg Glyptotek in Copenhagen, Denmark

Wounded Cupid at The Nye Carlsberg Glyptotek in Copenhagen, Denmark

In the summer of 1873, Carpeaux spent several weeks on holiday with his wife and son Charles at the house of Alexandre Dumas (fils) in Puys, near Dieppe. The idea for this work came to him when the child, after hurting his arm, smiled at him through tears. Executed in marble and exhibited at the following year’s Salon (1874), the work was a success with both the public and the critics, combining the tragic ingredients beloved of bourgeois taste with exceptional technical skill, resulting in the creation of two additional marble replicas during the artist’s lifetime. 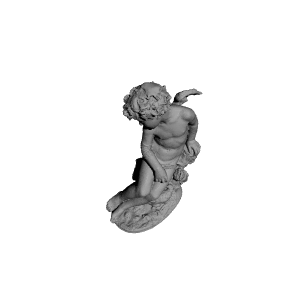 ×
3 collections where you can find Wounded Cupid at The Nye Carlsberg Glyptotek in Copenhagen, Denmark by geoffrey.marchal
×
Max
@MaxFunkner
3
Printed on: Prusa i3 MK2 Kit
Material: PLA
Posted at: 24th July 2017