A printer-friendly model of Wreck-It Ralph - requires no support when 3dprinting, and has the perfect level of detail for decorating after. Have fun!

Wreck-It Ralph is a 2012 American 3D computer-animated fantasy-comedy film produced by Walt Disney Animation Studios and released by Walt Disney Pictures.The film tells the story of the eponymous arcade game villain who rebels against his role and dreams of becoming a hero. He travels between games in the arcade, and ultimately must eliminate a dire threat that could affect the entire arcade, and one that Ralph himself inadvertently started. The film was directed by Rich Moore, who has directed episodes of The Simpsons and Futurama. The film features the voices of John C. Reilly, Sarah Silverman, Jack McBrayer, and Jane Lynch. 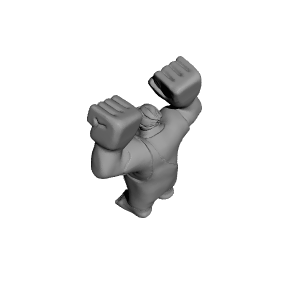 Scaled down, printed in orange :-D

Printed Nice on my Tronxy X3. Support free? Yes! for sure!