Jef Lambeaux (1852–1908) was a Belgian sculptor who worked during the late 19th century and early 20th century. His best known work is Temple of Human Passions, a colossal marble bas-relief. Most of Jef's work is figurative, as his main focus was motion and the force with which bodies move. That intention directly shows in this dynamic group statue of two wrestling olympians. 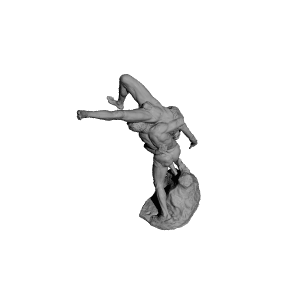