3D
360°
Featured Scan The World
2,093 views 275 downloads
2 collections
Community Prints Add your picture
Be the first to share a picture of this printed object
0 comments

Wriothesley Russell was the son of John Russell , 6th Duke of Bedford. He stayed in Italy in 1828, and in Rome from 20.4.1828 until at least 5.6.1828. This can be determined from Henry Edward Fox's diary entries from the two days:

” Sunday, April 20. Edward came to me early to pass the day. L y Compton came after church, and I had a visit from Wrio Russell, who had just arrived from London with W m Hope (Tommy Hope's son). ”, Earl of Ilchester, op. cit., p. 292.
Thursday, June 5. Rome, P zo Sciarra. L d and L y Compton, Mrs. Clephane, Wrio Russell and Garlies dined with us. ”, Earl of Ilchester, op. cit., p. 301.
Thorvaldsen produced a portrait bust of him, cf. letter of 4.5.1829 . Thorvaldsen's accounts of June 1830 also mention payments to Francesco Gianfredi , one of Thorvaldsen's employees, for the work on " Ritratto di Lord Doos " and " Ritrato di Lord Roos ". In 1831 it was again mentioned " un peducio per il Ritrato di Roosel ". In other words, the work seems to have taken place in June 1830, while a plinth was manufactured the following year. In 1830, this is probably the marble carving, ie. The model in plaster has existed before, as mentioned in the letter of May 1829, Honoria Louisa Cadogan mentions the bust.

The only retained letter from Wriothesley Russell to Thorvaldsen states that the two had an agreement with Thorvaldsen, but that Wriothesley had to postpone it. This deal was possibly made for Wriothesley to model Thorvaldsen.

The sculptor's portrait bust of Russell, however, has not been uniquely identified, but among Thorvaldsen's unidentified male busts, the A285 has been proposed. However, this identification is uncertain as it is based on a very little convincing comparison with Richard Westmacott's bust of Wrothesley Russell of 1844, who imagines him as a 40-year-old. However, the man on Thorvaldsen's bust bears some resemblance to Wriothesley's brother John Russell 2. , of whom Thorvaldsen did not, however, perform any portrait. Therefore, the similarity may perhaps be seen as an indirect indication that A285 represents Wriothesley Russell, cf. Sass, op. cit., p. 200. 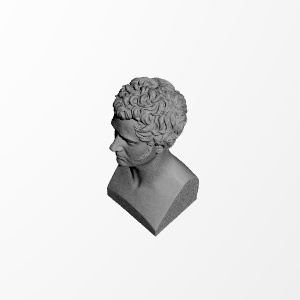 ×
2 collections where you can find Wriothesley Russell (?) by Thorvaldsen