3D
Scan The World
6,559 views 396 downloads
7 collections
Community Prints Add your picture
Be the first to share a picture of this printed object
1 comments

Xochipilli [ʃu˕ːt͡ʃiˈpiɬːi] was the god of art, games, beauty, dance, flowers, and song in Aztec mythology. His name contains the Nahuatl words xochitl ("flower") and pilli (either "prince" or "child"), and hence means "flower prince". As the patron of writing and painting, he was called Chicomexochitl the "Seven-flower," but he could also be referred to as Macuilxochitl "Five-flower." His wife was the human girl Mayahuel, and his twin sister was Xochiquetzal. As one of the gods responsible for fertility and agricultural produce, he was also associated with Tlaloc (god of rain), and Cinteotl (god of maize). Xochipilli corresponds to the Tonsured Maize God among the Classic Mayas.

Xochipilli was also the patron of both homosexuals and male prostitutes, a role possibly resulting from his being absorbed from the Toltec civilization. He, among other gods, was depicted wearing a talisman known as an oyohualli, which was a teardrop-shaped pendent crafted out of mother-of-pearl.

Xochipilli or the ‘Prince of Flowers’ was the Mesoamerican god of summer, flowers, pleasure, love, dancing, painting, feasting, creativity and souls. He is a benevolent manifestation of Piltzintecuhtli, the young sun god who was himself a manifestation of Tonatiuh, the supreme sun god of Mesoamerica. The god is closely associated with the corn (maize) god Centéotl and was sometimes referred to as the ‘Corn-flower Prince’ or Centéotl-Xochipilli, the 7th Lord of the Day. For the Aztecs he could also appear as Ahuiatéotl, the god of voluptuousness and he was also associated with butterflies, poetry and the 11th of the 20 Aztec days: Ozomatli (Monkey). He was considered one of the Ahuiateteo, the gods of excess, and for the Zapotec he was Quiabelagayo. Generally speaking, though, he was thought of as something of a youthful and care-free pleasure-seeker, perhaps with a playfully mischievous streak.

Perhaps the most famous representation of the god in art is the Late Post-Classical Period (1450-1500 CE) statue, a masterpiece of Aztec sculpture, now residing in the National Museum of Anthropology in Mexico City. The statue is 1.2 metres high and has Xochipilli seated on a temple platform (or perhaps a drum) which is decorated with butterflies, flowers and clusters of four dots representing the sun. Xochipilli is wearing a mask and is himself covered in flowers from psychotropic plants, hallucinogenic mushrooms and animal skins. Cross-legged and care-free the god is portrayed happily singing and playing his rattles, a vibrant symbol of all the good things in life. 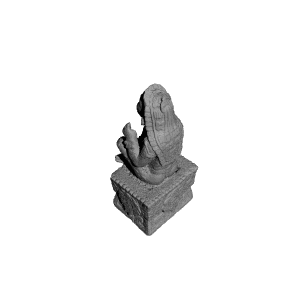 ×
7 collections where you can find Xochipilli by Scan The World