3D
360°
Featured Scan The World
1,752 views 200 downloads
1 collection
Community Prints Add your picture
Be the first to share a picture of this printed object
0 comments

Princess Golitsyna stayed in Rome in the winter of 1803-04 with her sister Countess Irina Vorontsova, who commissioned works from Thorvaldsen's hand. Golitsyna also wanted one of Thorvaldsen's works. During her stay in Rome, she had the sculptor model her portrait, which was later performed in marble.

This portrait was unidentified until the art historian Else Kai Sass in 1947 traced a portrait painting which undoubtedly represents Golitsyna. In his basic work on Thorvaldsen's portrait buster, Sass, op. cit., pp. 82-84, the painting with the colossal bust in marble at Thorvaldsens Museum, A304 , and concludes that the two portraits have such similarities that the marble bust must be identified as a portrait of Golitsyna. 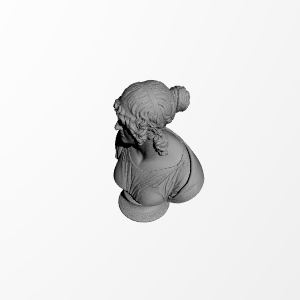 ×
1 collections where you can find Yevdokija Ivanovna Golitsyna by Thorvaldsen