3D
Scan The World
3,758 views 139 downloads
Community Prints Add your picture
Be the first to share a picture of this printed object
0 comments

This powerful, life-size female figure is a goddess known as a yogini. Hindu devotees worshipped yoginis as embodiments of female energy (Shakti), an energy that could be as ferocious as it was benevolent. Our yogini was once enshrined in a circular, open-air temple with at least 15 other goddesses. She has four arms, indicating her divine status—her upper arms might hold a jar of medicine and spatula, suggesting her curative capabilities. Her now broken bottom left arm would have held an outstretched skull cup for drinking liquor or blood. Yoginis were believed to possess powers of flight, to which the lightly incised bird underneath her right foot might allude. 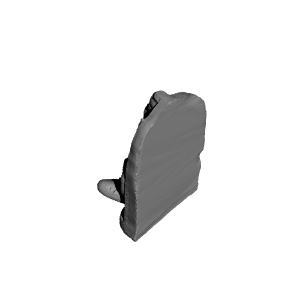 ×
0 collections where you can find Yogini with a Jar at The Minneapolis Institute of Art, Minnesota by jerry7171