This bronze sculpture was created by the French sculptor and medalist Marcel Courbier, cast by F. Barbedienne in Paris (inscribed on base). The artwork was created for the French pavilion at the 1930 World Exhibition in Antwerp, a design by the architect Joseph-Charles de Montarnal.

The 'Girl with Goat' adorned the Salon d'honneur with a fountain by René Lalique. After the World Exhibition it was donated by the city of Paris to Antwerp, after which it was set up in its current location in 1932.

The sculpture group depicts a young nude female who, kneeling with a cornhob in her right hand, entices a goat. Both figures are life-size and realistic in design according to academic tradition. It is an early work by Marcel Courbier, who was active in Paris and mostly famed for his memorials of the Resistance.

The sitter of the work is the (17 year old) Marcelle Battu, who was sentenced to death in 1944 for bearing a child with a German during Nazi occupance without a just trial

This bronze is a cast of the original sculpture group. After it was vandalised in 1942 and again 1944, it disappeared from public view. 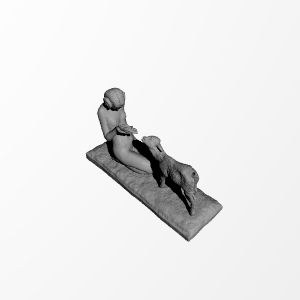 ×
17 collections where you can find Young Girl with Goat by Scan The World
×
Philippe Barreaud
@philippeb66
1
Printed on: Sindoh 3DWOX 1
Material: PLA
Posted at: 17th May 2022