Yue Celadon-Glazed Jar and Cover with Applied Medallions at The Sainsbury Centre of Visual Arts, Norwich

3D
Scan The World
5,351 views 216 downloads
Community Prints Add your picture
Be the first to share a picture of this printed object
0 comments

Yue Celadon-Glazed Jar and Cover with Applied Medallions at The Sainsbury Centre of Visual Arts, Norwich

This jar is circular in shape, adorned with a circular lid and a handle on either side. Each handle is decorated with a simple face formed only of eyes, nose and mouth. A medallion motif covers the upper half of the jar, forming horizontal bands whch encircle the object. The motif is circular in shape, and composed of a central square shape which is surrounded by crosses. Grooves also form horizontal bands which cover the top half of the jar, interspersed between each band of motifs. A fake modelled handle also adorns either side of the jar. The upper half of the pot has been glazed whereas the lower half has been left matt. The object is made from earthenware - the lower half is red-brown whereas the glazed upper half is a greenish colour. A chip can be found on the rim of the lid. A number of cracks are visible at the base of the jar and a few chips can be found on the unglazed surface, revealing the colour of the material underneath. 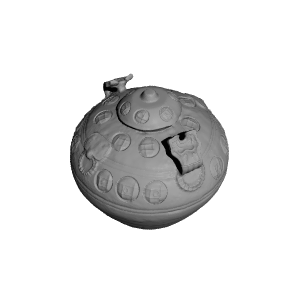 ×
0 collections where you can find Yue Celadon-Glazed Jar and Cover with Applied Medallions at The Sainsbury Centre of Visual Arts, Norwich by Scan The World