Zang at the Middelheim Museum

3D
Scan The World
1,967 views 64 downloads
Community Prints Add your picture
Be the first to share a picture of this printed object
0 comments

Zang at the Middelheim Museum

Hongo Shin (1905–1980) is one of the best-known sculptors to come out of Sapporo. There are approximately 80 outdoor sculptures by Shin placed all over Japan. His pieces appear to have a life of its own. They look as if they are emotional beings screaming in frustration.

1925, he entered the Department of Sculpture at Tokyo High school of Technology (presently the Department of Industrial Arts at Chiba University). After graduation,"The Head of Girl" was accepted for the first sculpture exhibition of the Kokugakai Association. Began studying under Kotaro Takamura. 1934 he became member of the Kokugakai Association.Took a growing interest in mounuments and began to create large works. 1942 "The Beatuty of Sculpture", was published by Fuzanpou Publishing Company. 1953 Monument to students killed in the war,"The Voice of the sea", was erected at Ritsumeikan University in Kyoto. Received the japan Peace Culture Prize. 1959 Shin sent his wood carving "Wailing" to the Japan International Art Exihibition sponsored by the Mainichi Newspaper. From 1959 to 1968,he served as a judge in the Kotaro Takamura Prize Compention.At the age of 57 years he participated in the International Sculpture Symposium promoted by the Asahi Newspaper. The Sakhalin Memorial Monument, "The Gate of Ice and Snow", was erected in Wakkanai. years later he held a self-selected exhibit for the 50 th anniversary of his works in Tokyo and Sapporo. On Februray 13 1980, he died of lung cancer at his home in Tokyo.

This model does not require any special consideration when printing. 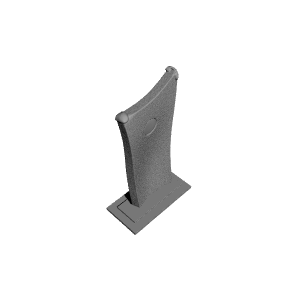