3D
360°
Scan The World
1,210 views 61 downloads
Community Prints Add your picture
Be the first to share a picture of this printed object
0 comments

Zeki Velidi Togan (1890–1970) was a Turkic historian, Turkologist, and leader of the Bashkir revolutionary and liberation movement.

In Turkistan, Velidi became a leader of the Basmachi Movement and from 1920 to 1923 he was chairman of the "National Union of Turkistan". In 1923 Validi emigrated, after discovering original manuscripts of Ahmad ibn Fadlan in Iran. From 1925 Velidi lived in Turkey, becoming a teacher and professor at Istanbul University. However, his controversial critique of the Turkish history thesis forced him to seek refuge in Vienna, where he became a doctor of philosophy. He later started teaching at Bonn University and Göttingen University. In 1953 he became organizer of the İslam Tetkikleri Enstitüsü (Institute for Islamic Studies) at Istanbul University. In 1967, he was given an honorary doctorate from the University of Manchester.
At the same time he contributed to the Encyclopedia of Turkic Peoples. His articles about culture, language and history of Turkic peoples have been translated into many languages.

This monument for and depicting the man is located in the courtyard of St. Petersburg State University between the Faculty of Philology and the ball game hall. 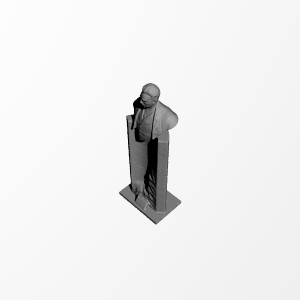