3D
1,568 views 60 downloads
1 collection
Community Prints Add your picture
Be the first to share a picture of this printed object
0 comments

This was my sixth entry for the 30 Characters Challenge. Each day in November I'll be designing and posting a new model (though the prints may come a tad later, depending on how on-the-ball I am). Each character is randomly generated using the Continuum Narrative Engine (a storytelling game system currently in the works here at the Ill Gotten Games headquarters). I'll get the rest posted here as I print them, but for now you can follow the WIP models here...

Brilliant scientist, war hero, trans-universally acclaimed opera singer. Zenn Zaran is all of these things and far, far more. Were his life a book, the stories of a thousand lesser beings would barely fill the prologue. The last of an otherwise extinct species, Zenn Zaran is considered by many to be the most intelligent corporeal being in the known Multiverse. A celebrity without peer, he has grown reclusive, holing up in his mansion in Nexus City. No one has met with Zenn Zaran and spoken about it for over one hundred years, though he is occasionally sighted in Nexus City, flying on the back of his Scintillating Star Dragon, Magnifithrax.

Printed in PLA at a 230 extruder temp, .10 layer height, 10% infill, 2 shells. Assembled with superglue and painted in water based acrylics. 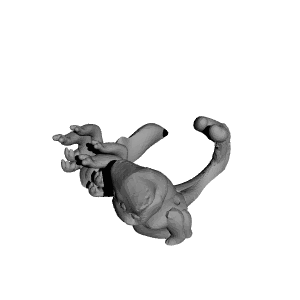 ×
1 collections where you can find Zenn Zaran, Last of the Celestial Artificers by dutchmogul