Zephyr and Psyche at The Louvre, Paris

3D
Scan The World
5,990 views 672 downloads
5 collections
Community Prints Add your picture
Be the first to share a picture of this printed object
0 comments

Zephyr and Psyche at The Louvre, Paris

Cupid and Psyche is a story from the Latin novel Metamorphoses, also known as The Golden Ass, written in the 2nd century AD by Apuleius. It concerns the overcoming of obstacles to the love between Psyche ("Soul" or "Breath of Life") and Cupid (Latin Cupido, "Desire") or Amor ("Love", Greek Eros), and their ultimate union in asacred marriage. Although the only extended narrative fromantiquity is that of Apuleius, Eros and Psyche appear in Greek art as early as the 4th century BC. The story's Neoplatonic elements and allusions to mystery religions accommodate multiple interpretations, and it has been analyzed as anallegory and in light of folktale, Märchen or fairy tale, and myth.

Since the rediscovery of Apuleius's novel in the Renaissance, the reception of Cupid and Psyche in the classical tradition has been extensive. The story has been retold in poetry, drama, and opera, and depicted widely in painting, sculpture, and even wallpaper.

This sculpture by Henri-Joseph Rutxhiel (1775-1837) was carved out of marble and presented to the salon in 1814. The scene depicts Psyche's descention from a mountain to live with her future husband; for a fun summary click this link! 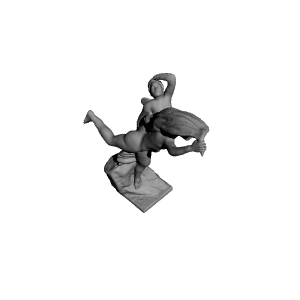 ×
5 collections where you can find Zephyr and Psyche at The Louvre, Paris by Scan The World