Zeus, god of the skies and master of Olympus

3D
Scan The World
2,589 views 481 downloads
3 collections
Community Prints Add your picture
Be the first to share a picture of this printed object
0 comments

Zeus, god of the skies and master of Olympus

This sculpture depicts Zeus, god of the Olympus with an eagle by his side. The head of the god and that of the eagle are considered to be modern parts.

The eagle is often depicted on Zeus' side, the eagle is in fact the god's messenger and his most loyal animal and companion. According to the mythololgy, the eagle was once a mortal human being named Periphas. Periphas was a king who was celebrated and known like a god within the mortals. Zeus got angry at him and threw him a thunderbolt, Apollon intervened transforming the king into an eagle and sitting him beside Zeus as a punishment.

Other stories narrate how the golden eagle was never a human being, he was adopted by Zeus as a sign of good omen before the Titan War. 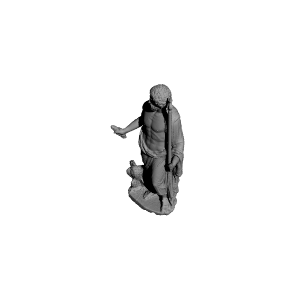 ×
3 collections where you can find Zeus, god of the skies and master of Olympus by Scan The World