3D
Scan The World
6,474 views 248 downloads
5 collections
Community Prints Add your picture
Be the first to share a picture of this printed object
0 comments

Knife money is the name of large, cast, bronze, knife-shaped commodity money produced by various governments and kingdoms in what is now known as China, approximately 2500 years ago. Knife money circulated in China between 600 to 200 B.C. during the Zhou dynasty. There are several stories that attempt to explain how knife money was introduced but it is not certain if any or all are true. In one of the stories a prince who was running low on money to pay his troops allowed them to use their knives as a form of currency to barter with villagers and the medium became so popular that it became generally accepted. In another story, the same prince began accepting knives as payment for small fines in the place of the current legal ring money. Knife money may also have been brought in by sea traders from the Indian Ocean.

This is a pointed tip knive; the end of the blade is curved but lacks the long pointed tip of the needle tip knives. The find spots of this type of knife money in the north-east of China associate it with the State of Yan. In recent years, hoards of up to 2,000 of these knives have been made, sometimes tied together in bundles of 25, 50, or 100. Over 160 different inscriptions have been recorded. Some inscriptions represent numbers or cyclical characters, but many have not been deciphered. Unlike the hollow handle spade money, the characters have not been generally associated with known places names. Their sizes and weights (11 to 16 grams) are very variable, leading to various sub-types being proposed by various authorities.
(Credit; Wikipedia)

This print is made on MakerBot Replicator Fifth Generation. The dimension of the model 20mm x 150mm x 9mm, Infill 10%, with support and layer high 0,2. Provides very nice results! 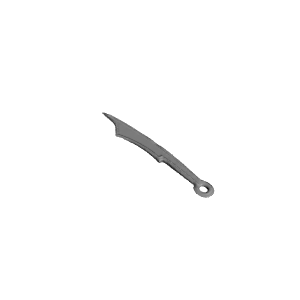 ×
5 collections where you can find Zhao State knife money at The British Museum, London by Scan The World