3D
Scan The World
1,964 views 82 downloads
Community Prints Add your picture
Be the first to share a picture of this printed object
0 comments

The sculptures by Camiel Van Breedam playfully creates wheeled structures which may or may not work. The style of the objects is similar to the odd shapes of old firearms and heavy artilery found across Europe. This plays on the awe and surreal forms of these old weapons, creating objects of intrigue and imagination.

This sculpture, 'Solar Car', has been designed to transport the sun, according to the sculptor.

This assembly is a unique specimen and prime example of Breedam's art. He is fascinated by the relationship between finite and infinite, between inside and outside. He wants to shape the cyclical course of life and involve the viewer. Breedam also makes tables, collages and installations in which he places in banal environments such as shop windows, subway stations or libraries.

He often works with found objects, wanting to save himself from the mania of Western consumerism and give these objects a new life. Breedam has won numerous awards, both nationally and internationally. He belongs to the G58 Hessenhuis group in Antwerp and the Paris Mouvement Phases. 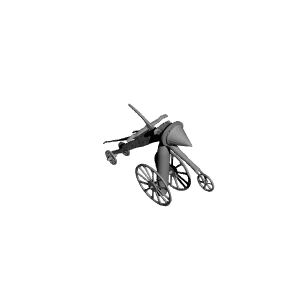 ×
0 collections where you can find Zonnewagen by Scan The World