3D
Scan The World
1,676 views 56 downloads
1 collection
Community Prints Add your picture
Be the first to share a picture of this printed object
0 comments

There is an unmistakably turtle-like form to Zoomorph N, with heads emanating from both ends. At one end is a skull that is curiously rotated by 45°; at the other end is the head of a goofy old man wearing a cloth hat or hair-net, with human-like arms. This old man is a deity named God N and his hat is thought to be made of crocodile skin rather than a net. God N, also named Pauahtun, is the patron of writing (or scribes) who also takes on the role of the four Bakabs to hold up the sky in the four corners of the universe (cardinal points). He wears a shell on his back, which is thought to represent the Earth - so he effectively is the bearer of the world or universe. 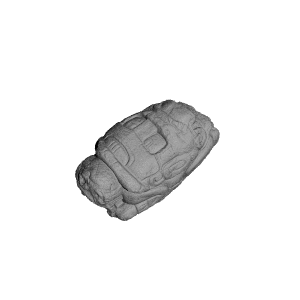