3D
Featured Scan The World
1,574 views 129 downloads
Community Prints Add your picture
Be the first to share a picture of this printed object
2 comments

One of the most recognisable symbols in Zweibrücken is "S Luiche", born 11th May 1860. His real name was Ludwig Arnold, who made a name for himself as "Service Man Number 1" in Zweibrücken.

In his prime he stood at the trains station with his red service cap emblazoned with "Service Man No. 1" according to his own statement, he was the inventor of this job title. Whenever a train arrived at Zweibrücken, he would welcome the passengers. He also made additional income by carrying the traveller's suitcases, but also by selling pretzels, postcards and shoelaces.

The Zweibrücken sculptor Gerd Dehof dedicated a bronze cast sculpture to him, which stands in front of the Alexander Church and has been a popular photo motive for young and old for decades. Almost every child in Zweibrücken has sat on the shoulders of the Luiche and was photographed that way.

This model is almost support less. Mostly the hands and some small overhangs are there. 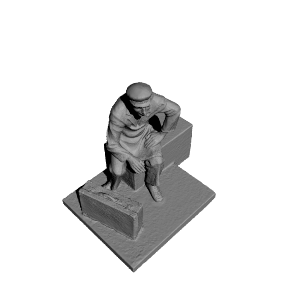