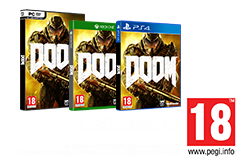 Here is my submission for the #MYBFG3D competition. I'm no artist nor do I have the skill to model my idea. I've been through a couple of weeks of designing and ideas. I had ideas to make the BFG a modular weapon that could be modded (almost like a NERF gun) but I didn't think personally it was a good idea. Instead I kept it simple, as simple as I could to the original design. I'm not good at drawing all the angles either so I've drawn the initial side view. It's big. It's bulky. It's a Big Friggin' Gun! I took inspiration from all the other BFG's in gaming history (more so id Software's games). More apparant features such as the ventiliation pipes on the side taken from Quake 2's BFG10K. I wanted to keep it original and classic as a mega fan of the Doom franchise, I felt this was a good choice.

The BFG-9000 is the pinnacle of weapon manafacturing and scientific research. Created within the UAC's very own BFG Division, it took 27 years to develop the weapon. It had gone through a tough development cycle due to it's unstable power and the goal to stabilize it. Originally researches wanted to create a 'portable thermo-nuclear cannon' capable of obliterating anything in it's path. It's uses were designed to be used as the ultimate weapon upon military contractors and even construction uses to clear large areas or surfaces in aid for the UAC's colonization missions as well as a deadly defense against the creatures of Hell during the UAC's tethering operations. The BFG-9000 sports several previous prototypes used by great adversaries and have proved to be deadly firearms, however the recent model of the BFG-9000 is the most deadliest version to date. It's portable miniature nuclear reactor charges up a powerful ball of lethal energy that further absorbs from a plasma cell pack, fusing a deadly blast that is released from the barrel. Due to its sheer power, the weapon has several venting pipes and ventilation systems including a heat sink rail barrel in order to excrete the high temperatures and stop the gun from overloading like it's previous model. The BFG-9000 features shoulder supports due to the weapons extreme kickback, but these have been designed to maintain complete recoil from disturbing the user, thus has barely any kick back. The BFG-9000 also features a homing nano-chip within the beam it shoots. This enables the BFG's beam to seek nearby targets and pull itself towards them, homing in on prey and giving them a tough time. The BFG's beam is barely stable enough to keep itself steady and also jets out bolts of static energy that will damage nearby entities. The BFG-9000 is truly a fearsome weapon cable of mass destruction.

The UAC's tethering operations in the deep ruins of Hell in the year [REDACTED] meant the excavating of ancient demonic runes. Upon inspection and research, it was later revealed that these ruins could be used and combined with technology to increase its initial performance. [REDACTED] One such genius among the BFG Division's research team decided to experiment with the latest model BFG and fuse a demon rune with the BFG-9000. Due to mysterious nature of the demon runes, it fused with the entire weapon system and became unreliable unstable. [REDACTED] There is not much information on the Demonized BFG-9000, only a handful of notes upon the unholy fusion is available. [REDACTED] "The 'Demonized BFG-9000' is the result of fusion between a demon rune and the weapon itself. The power held within the rune unleashed an evil energy that has inevitably enveloped over the entire weapon system and 'corrupted' it. It now bares bones and rotting flesh, similar to the aesthetic of Hell that has been documented [REDACTED] Upon test firing in the BFG Division, it seemed to take half the time to charge the shot, however its power recorded off the charts and destroyed half the BFG Division's facility. Based on the recovered Echoes, the beam has turned from the usual green energy ball to a massive and destructive dark purple and black, sparking electrical bolts from it. It has also been noted by military contractors who have used the BFG in its 'corrupt' state, that the weapon seems to whisper to the user. These users have since been detained for mental psych evaluations with the UAC medical center.

The latest model of the BFG-9000 took inspiration from one of its earlier models, due to it being a popular design amongst the UAC operatives.
The BFG-9000 has only been handled without the use of equipment by a single UAC military operative. [REDACTED]