3D
3,359 views 356 downloads
Community Prints Add your picture
Be the first to share a picture of this printed object
0 comments

Well, here it is, a coaster with a marvel logo. I choose this logo cause i thought it would stand out more, printed in one color. When i was younger i have read a few comics, both Marvel and DC. Now i use my comics to decorate my house. I also have seen a few Marvel movies, and trust me, there awesome. Use this coaster to put down your most beloved beverage. Or even to use the last 20 gram (2.59meter) filament at the end of your spool. I will use this coaster to put down my cup of coffee of bottle of water, cause that's what i drink the most. My print-time on this model was 2hours and 43 minutes.

Marvel started in 1939 as Timely Publications, and by the early 1950s, had generally become known as Atlas Comics. The Marvel branding began in 1961, the year that the company launched The Fantastic Four and other superhero titles created by Steve Ditko, Stan Lee, Jack Kirby and many others.

Marvel counts among its characters such well-known superheroes as Spider-Man, Iron Man, Captain America, Thor, the Hulk, Captain Marvel, Black Panther, Deadpool, Doctor Strange, Wolverine, Daredevil, Ghost Rider and the Punisher, such teams as the Avengers, the X-Men, the Fantastic Four, the Inhumans and the Guardians of the Galaxy, and antagonists including Thanos, Doctor Doom, Magneto, Red Skull, Green Goblin, Ultron, Doctor Octopus, Loki, and Venom. Most of Marvel's fictional characters operate in a single reality known as the Marvel Universe, with most locations mirroring real-life places; many major characters are based in New York City.[2]

I printed this object in Ultimaker white PLA. At 0.15mm layerheight and 10% infill (Gyroide pattern). I used a 0.4mm nozzle and heated bed.

If you would like to know how i design a 2D picture (google) into a 3D model.

Use this link:
https://www.youtube.com/watch?v=g6cmClwLhz8 (video is under 6 min.) 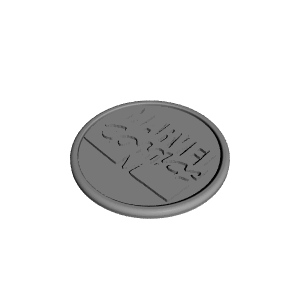