A figure of a rearing horse in bronze, on a marble base, reputedly from a cast by Leonardo Da Vinci. It is one of four similar horses. Of the three others, one is in the Metropolitan Museum in New York, the second in the Szepmuveszeti Museum, Budapest, and the third in the Jeannerat Collection, London. This horse has been linked to a drawing on a sheet by Leonardo Da Vinci in the Royal Library, Windsor Castle, UK. The drawings represent the first thoughts of Leonardo for the Battle of Anghiari wall painting, a major commission from the Florentine Republic in 1503. Whether this horse was cast from a scaled-up clay model in Florence, or modelled in the Milan workshop of the sculptor Pompeo Leoni (who owned the drawings of Leonardo towards the end of the 16th century) is debatable. 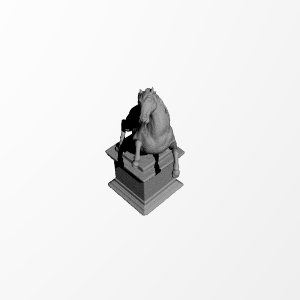