3D
360°
Scan The World
1,479 views 114 downloads
Community Prints Add your picture
Be the first to share a picture of this printed object
0 comments

This statue, originally placed in a niche as suggested by the rough working of the back, portrays a young woman dressed in a fine chiton, tied under the breasts with a belt and a richly draped cloak. She wears an animal skin crossed over her breast; this together with the fawn held under her left arm, allows us to identify the figure as a maenad or as Artemis. This essentially decorative sculpture can be hypothetically dated to the mid-1st century BC; the iconography is in the Roman classicizing taste of this period, preferring the works of Greek artists. The head, ancient but not pertinent, was added in the 18th century alongise the circular base 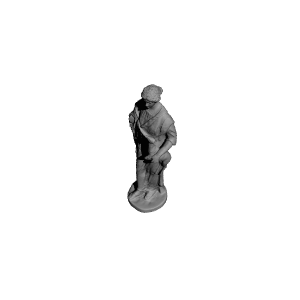