Kore (maiden) refers to statues depicting female figures, always of a young age, which were created during the Archaic period (600 – 480 BCE) either as votive or commemorative statues. Wealthy patrons commissioned them either to serve the deities in place of the patron, or as less often was the case, to become commemorative grave markers for members of a family. This antique marble Kore had been painted in color. The figure of the girl, restored here in color, was excavated in 1886 at the Acropolis of Athens with very well-preserved color remains. At the end of the 19th century, Swiss artist Emile Gillieron Pere documented the colors and ornaments in a watercolor drawing. 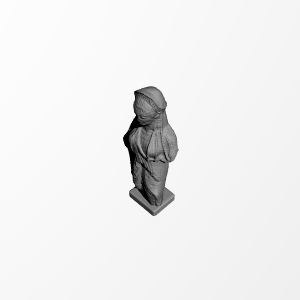