3D
360°
Scan The World
2,014 views 210 downloads
1 collection
Community Prints Add your picture
Be the first to share a picture of this printed object
0 comments

For decades, research on this slightly over life-size statue has focussed primarily on two questions. The first concerns the reconstruction of the lost pieces, including the support that once held up the left arm – for these would help complete the interpretation of the statue as a whole. The other question is whether the statue (acquired in Venice for the Berlin Antikensammlung) is a Greek original from the high Classical period and therefore follows the Parthenon pediments. If not, is it a workshop copy from this same period? Or is it a later Roman copy? The head, worked separately, is unfortunately lost, as is the neck, the left shoulder, the entire right arm, and the left arm below the elbow. Several restorations to the folds in the mantle and left knee suggest that the left foot and tortoise – the only preserved attributes – were also restored in the modern period. A support under the left elbow is now lost, but its base is still visible.

The goddess towers over the viewer, her robes accentuating rather than hiding her powerful body. The sensuality of the sculpture would certainly accord with its identification as Aphrodite. She wears a belted chiton with short, buttoned sleeves, and a mantle (himation) pulled around her lower body and thighs. Slung over her left arm, the mantle wraps around her hips before falling loosely beside her advanced left leg – providing a compositional accent to her raised left foot, propped upon a small tortoise. The restorer was right to make the prop a tortoise: Pausanias recounts that the Aphrodite Urania carved by Phidias for Elis had one foot set upon a tortoise (6, 25, 1), and that another Aphrodite Urania stood on the Kolonos Agoraios in Athens (1, 14, 7). Other statues depicting Aphrodite with a tortoise (a statue in Kyrene, for instance, and a relief in the Vatican) suggest that the Berlin Aphrodite once leant on a female herm rather than the archaistic idol that scholars had originally proposed. Indirect confirmation comes from the female herm excavated in the Agora in Athens. Female herms likely alluded to an eastern manifestation of Aphrodite and thus to her particular role as Aphrodite Urania. Despite attempts to complete the Berlin statue with a marble head found in the theatre at Arles, the chronology of the two pieces cannot be reconciled.

The statue’s narrow hips, wide shoulders, and widely set breasts have lead some to compare the figure with the group of three goddesses on the east pediment of the Parthenon, or with a figure on the Erechtheion frieze in Athens (now in the Acropolis Museum). This in turn raises the question of whether the Berlin Aphrodite is a Greek original. Her provenance from a collection in Venice may speak for this possibility, since several originals did come to Venice from Greece in the seventeenth century. But more often it is the overall effect of the piece and the extraordinary quality of the preserved details, especially in the drapery, that time and again lead to the statue’s acceptance as an original. Yet this statue displays none of the careful craftsmanship of an Attic original: the tool marks are clearly visible, as in the running drill channels in the folds of the chiton on the left side; and the head, arms, and supports were attached separately. The drapery, especially the himation, also lacks the liveliness expected of an original. In this light, she is probably a copy after one of the “Aphrodite with tortoise” statues mentioned by the ancient sources. 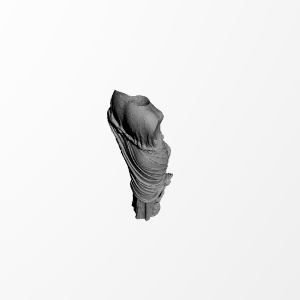 ×
1 collections where you can find Aphrodite Urania, the so-called "Aphrodite with tortoise" von SMK - Statens Museum for Kunst