3D
Featured Scan The World
3,001 views 353 downloads
2 collections Add to collection
23 1
Community Prints Add your picture
Be the first to share a picture of this printed object
1 comments

This cast is taken from one of nine female portrait busts ascribed to the Italian renaissance sculptor Francesco Laurana on the basis of their resemblance to a series of documented groups of the Virgin and Child by the artist. Two of those nine busts - in the Frick Collection, New York, and in the National Gallery of Art, Washington D.C. - are closely related to this portrait, and even appear to represent the same person. They have similar bases decorated with classicizing figures. Remains of extensive pigmentation survive on the marble, along with faint incised decoration of the dress, to form a richly gilded pattern. The cavity on the breast may once have been covered by a metal brooch or pendant, and the cartouche might have originally been inscribed with the sitter's name. The sitter has been tentatively identified as Ippolita Maria Sforza, the wife of King Alfonso II of Naples, although this identification is hypothetical.

During a fire towards the end of the Second World War, the marble portrait head in Berlin was divided from the rest of the bust, including its decorative base. The shoulders and integral base are now in Moscow, while the head is in the Bode Museum, Berlin. This plaster cast was made in the 1880s, before this extensive damage to the marble original. 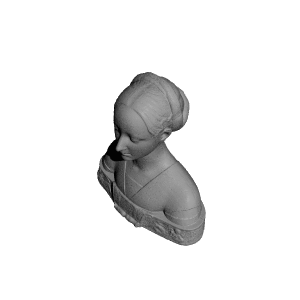