3D
Scan The World
2,468 views 175 downloads
1 collection
Community Prints Add your picture
Be the first to share a picture of this printed object
0 comments

This is a plaster cast of the original bronze head of Bartolomeo Colleoni (died 1475), from the equestrian monument in Campo SS. Giovanni e Paolo in Venice. Bartolommeo Colleoni (d. 1475) was a condottiere or mercenary leader, who had commanded the Venetian troops. In his will, he bequeathed a sum of money for this monument. The commission was awarded to Verrocchio in April 1480, but he left the statue unfinished at his death in 1488. It was cast by Alessandro Leopardi of Ferrara (1480- 96), whose signature appears on the girth of the horse. The plaster was cast by Elkington & Co. in Birmingham or London in about 1885. 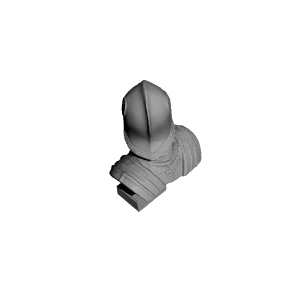