Head of Chahk, a Rain God

3D
360°
Featured Scan The World
2,449 views 318 downloads
6 collections
Community Prints Add your picture
Be the first to share a picture of this printed object
0 comments

Head of Chahk, a Rain God

This monumental head carved from limestone depicts a supernatural being. Its subject is defined by skeletal features and wears large earflares and a beaded headband. Long hair is held back and indicated by deep incisions flowing down the reverse side of the head. A circular boss dominates the forehead, probably representing a round jewel hanging down from the headband. This head, now detached, likely belonged to an architectural sculpture in high relief as part of a façade or as a free standing monument.

Deities such as the one depicted here were seen to have a different type of vision than humans by the Maya, and artists indicated this through the eyes. The prominent eyes, framed by heavy brows and under-eye lines that terminate in scrolled shapes, have an incised spiral-shaped pupil with traces of red pigment. Combined with the raised dots on the cheeks on either side of the nose, these pupils are markers of godliness in Maya art. The fleshless jaw contains a row of straight, squared teeth and two scrolls emerge from either side of the mouth. The nose is damaged. That loss may have occurred over the course of its use in antiquity.

Maya artists often depicted supernatural entities with a mixture of attributes or aspects relating different deities. This approach complicates efforts to identify their subjects with particular divine attributes relating to their pantheon. Most of the depicted features – the skeletal jaw, scrolls emitting from the mouth, the earflares, god eyes with spiral pupils, and long hair – associate this image with the rain deity, known as Chahk. The under-eye scrolls, however, could also indicate that the artists infused this rain deity with an aspect of the Sun God, whose eyes are often adorned with such motifs.

The sculpture of the deity face also reflects the facets of several different stylistic approaches, which is one of the hallmarks of art from Chichen Itza. The blurring of styles is commonly interpreted as evidence of Early Postclassic Period (ca. AD 900-1200) interaction between the Maya at Chichen Itza and their contemporaries, the Toltecs in Central Mexico. Regardless of its precise identification, the representation was a supernatural portrait meant to draw the viewers’ attention to the mercurial natural phenomena personified in this fearsome face.

Excavated by George Vaillant in 1926 at Chichen Itza, this head was found in a small, south-facing temple nicknamed the “Casa de Cabecitas” or “House of the Small Heads” (Structure 5C3). This head was the finest of many pieces of sculpture in the round from within the temple chamber, including two intact atlantean figures that once supported the lintel of the entryway. The fact that the body associated with this Rain God head was not found may indicate that the inhabitants of the city removed the head from its original location and revered it enough to place it in the small temple.

The site of Chichen Itza was designated a UNESCO world heritage site in 1988 and currently receives over two million visitors per year. The city itself was settled in the Early Classic period (ca. A.D. 250-550), but reached its peak of population and architectural constructions in the Late and Terminal Classic periods (ca. A.D. 650-1000). When the Spanish arrived in the 16th century, Diego de Landa noted that local populations near Chichen Itza continued to perform religious ceremonies and throw offerings into the Sacred Cenote, a water-filled sinkhole that was a pilgrimage destination for centuries. 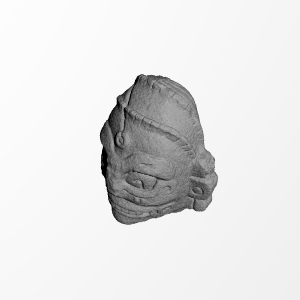 ×
6 collections where you can find Head of Chahk, a Rain God von MacaulayHonorsCollege