Jeanne d'Arc at The Art Institute of Chicago, Illinois

3D
Scan The World
4,982 views 430 downloads
3 collections
Community Prints Add your picture
Be the first to share a picture of this printed object
0 comments

Jeanne d'Arc at The Art Institute of Chicago, Illinois

This is a bust of Jeanne d'Arc (1875 - 1900), originally from France the gilt bronze sculpture is attributed to sculptor Antonin Mercié (1845-1916) but no date of its completion are given. It stands at 22 x 21 x 11 inches and is currently not on display at the Art Institute of Chicago in the USA.

Joan of Arc, nicknamed "The Maid of Orléans" (French: La Pucelle d'Orléans), is considered a heroine of France and a Roman Catholic saint. She was born to Jacques d'Arc and Isabelle, a peasant family, atDomrémy in north-east France. Joan said she received visions of theArchangel Michael, Saint Margaret, and Saint Catherine instructing her to support Charles VII and recover France from English domination late in the Hundred Years' War. The uncrowned King Charles VII sent Joan to the siege of Orléans as part of a relief mission. She gained prominence after the siege was lifted in only nine days. Several additional swift victories led to Charles VII's coronation at Reims. This long-awaited event boosted French morale and paved the way for the final French victory.

On 23 May 1430, she was captured at Compiègne by the Burgundian faction which was allied with the English. She was later handed over to the English, and then put on trial by the pro-English Bishop of Beauvais Pierre Cauchon on a variety of charges. After Cauchon declared her guilty she was burned at the stake on 30 May 1431, dying at about nineteen years of age. 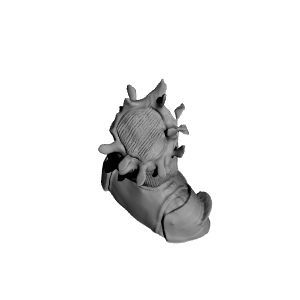 ×
3 collections where you can find Jeanne d'Arc at The Art Institute of Chicago, Illinois von Scan The World