3D
Scan The World
1,218 views 42 downloads
Add to collection
0 0
Community Prints Add your picture
Be the first to share a picture of this printed object
0 comments

The statue of Amenemint reflects a widespread type of Ancient Egyptian burial sculpture from the era of the New Kingdom. The "King's Fan-bearer" and "King's Scribe", Amenemint is shown wearing his official robes, kneeling and holding in his hands a sacrifical table. The loss of the face makes it impossible to fully deduce his appearance. On the sacrificial altar are incised depictions of gifts to the gods of the cities of Memphis and Heliopolis: a goose, a leg and head of a bull, birds, vegetables, fruits and ritual bread. These are recorded in the traditional sacrificial formula written on the statue. Inscriptions with numerous titles reveal Amenemint to have been one of the closest courtiers of Rameses II (13th century BC), the pharaoh famous for his campaigns and building activity. Amenemint was his chief fan-bearer, librarian, administrator of his palace and the funerary temple - the Ramesseum - on the west bank of the Nile at Thebes.

Easy print, some supports needed but easy to remove. 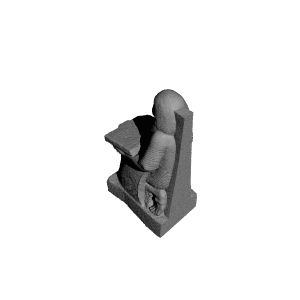