The Laocoön Group at The Vatican Museums, Vatican City

The Laocoön Group at The Vatican Museums, Vatican City

An icon of Hellenistic art, the figurative Greek sculpture known as the Laocoon Group, or Laocoon and His Sons, is a monumental statue which is on display at the Museo Pio Clementino, in the Vatican Museums, Rome. It is a marble copy of a bronze sculpture, which - according to the Roman writer Pliny the Elder (23-79 CE) - depicted the Trojan priest Laocoon and his two sons Antiphas and Thymbraeus being killed by giant snakes, as described by the Roman poet Virgil (70 BCE - 19 CE) in his epic poem the Aeneid. The statue, which was seen and revered by Pliny the Elder in the palace of Titus Flavius Vespasianus (39-81 CE), the future Roman Emperor Titus (ruled 79-81), was attributed by Pliny to three sculptors from the Greek island of Rhodes: Hagesander, Athenodoros and Polydorus. This attribution coincides with an inscription on a fragment from other similar marbles discovered separately from the Laocoon itself. Despite persistent uncertainty as to its date and details of its original provenance, Laocoon and His Sons is considered to be one of the greatest works of Greek sculpture of the Hellenistic Period.

The Laocoon statue was discovered in January 1506 buried in the ground of a Rome vineyard owned by Felice de' Fredis. One of the first experts to attend the excavation site was Michelangelo (1475-1564), the famous Renaissance sculptor. Pope Julius II, a lover of Greek art, ordered the work to be brought immediately to the Vatican, where it was installed in the Belvedere Court Garden. Not surprisingly, given Pliny's comment that it was "superior to all works in painting and bronze", the Laocoon statue had a significant impact on Italian Renaissance art in general and Renaissance sculptors, in particular.

In fact, the Laocoon rapidly became one of the most studied, revered and copied works of ancient art ever put on display. Other famous treasures in the Vatican Museums, like Leochares's Belvedere Apollo (c.330 BCE) and Apollonius's heroic Belvedere Torso (1st/2nd Century BCE) were outshone by comparison. Since its discovery in 1506, many copies have been made of the Laocoon, including a bronze version by Baccio Bandinelli (1493-1560), now in the Uffizi Gallery, Florence, and a bronze casting, made by Francesco Primaticcio (1504-1570) for the French King Francis I, now at the Louvre in Paris. Other copies can be seen in the Grand Palace of the Knights of Saint John in Rhodes, and at the Archeological Museum of Odessa.

As a result of its enduring fame, the Laocoon statue was removed from the Vatican by Napoleon, in 1799, taken to Paris where it was installed in theL ouvre as an exemplar of Neoclassical art. It was returned to the Vatican in 1816, by the British authorities in Paris, following the defeat of Napoleon at Waterloo.

In 1957, sculptural fragments belonging to four marble groups portraying scenes from Homer's epic poem the Odyssey (8th/9th century BCE) were unearthed at Sperlonga, Naples. The site of the discovery was an ancient banquet hall formerly used by the Roman Emperor Tiberius (ruled 14-37 CE). One of the fragments, a bust of Odysseus, is stylistically very similar toLaocoon and His Sons, while the names Hagesander, Athenodoros and Polydorus were inscribed on another fragment.

In 1906, Laocoon's right arm (missing from the original find in 1506) had been discovered by chance in a builder's yard in Rome by the archeologist Ludwig Pollak, director of the Museo Barracco. Believing it might be the lost arm in question, Pollak donated it to the Vatican Museum, where it remained for over fifty years. Then in 1960 museum experts verified that the arm belonged to the Laocoon. Accordingly, the statue was reassembled with the new arm attached.

The Laocoon statue, standing some 8 feet in height, is made from seven interlocking pieces of white marble. Its exact date of creation is uncertain, although - in line with several inscriptions found in Rhodes dating Hagesander and Athenedoros to some time after 42 BCE - experts now believe that it was sculpted between 42-20 BCE. More importantly, it is not known for certain whether it is an original Roman sculpture or a copy of an earlier Greek sculpture. That said, experts now believe that its three sculptors - Hagesander, Athenodoros and Polydorus - were highly-skilled copyists who specialized in producing replicas of original Greek figures for wealthy Roman customers. Thus, in all probability, the Vatican Laocoon is a copy of a Greek Hellenistic bronze - almost certainly from the Pergamon School, see similar drama, straining muscles and contorted faces in the Great Altar of Zeus(c.180 BCE, Pergamon, Turkey). This conclusion is also consistent with the findings of several renovations performed on the statue. Who commissioned the Laocoon replica is not known.

The latest theory, proposed in 2005 by Lynn Catterson, is that the Laocoon is a forgery created in 1506 by Michelangelo. This has been dismissed as "non-credible" by Richard Brilliant, in his book My Laocoon.

As described in Virgil's Aeneid, Laocoon was a Trojan priest. When the Greeks, who were holding Troy under siege, left the famous Trojan Horse on the beach, Laocoon tried to warn the Trojan leaders against bringing it into the city, in case it was a trap. The Greek goddess Athena, acting as protector of the Greeks, punished Laocoon for his interference by having him and his two sons attacked by the giant sea serpents Porces and Chariboea. In the sculpture, one son can be seen to break free from the snakes, and looks across to see his father and brother in their death agonies.

Michelangelo himself was especially impressed by the huge scale of the work, as well as its expressive aesthetics, so typical of Greek sculpture from the Pergamon School of the Hellenistic period. Similar emotive qualities reappear in Michelangelo's own works, such as Dying Slave (1513-16, Marble, Louvre, Paris). But see also David by Donatello (1440s) for an Early Renaissance interpretation of the standing male nude, and David by Michelangelo (1504) for a High Renaissance interpretation.

The emotionalism in Laocoon and His Sons was highly influential on laterBaroque sculpture (c.1600-1700) as well as Neoclassical sculptors (c.1770-1830). The German art historian Johann Joachim Winckelmann (1717-68) saw the statue as the embodiment of Neoclassical nobility and heroicism, although he admitted the inherent difficulty - for any observer of Laocoon - of appreciating beauty in a scene of death. Winckelmann's comments were afterwards adopted by Gotthold Ephraim Lessing, in his influential treatiseLaokoon (1766).

All in all, the statue has retained a continuing fascination for succeeding generations of sculptors: a phenomenon brought fully up to date by the 2006 Vatican exhibition, marking the 500th anniversary of its discovery, and the 2007 exhibition held at the Henry Moore Institute in Leeds (UK), entitledTowards a New Laocoon. 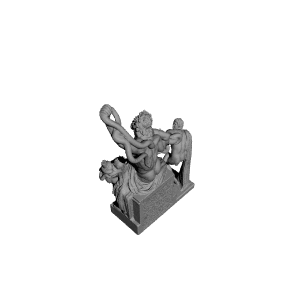 ×
13 collections where you can find The Laocoön Group at The Vatican Museums, Vatican City von Scan The World
×
Tyler Public Library
@TylerPublicLibrary
1
Printed on: Other
Material: ABS
Posted at: 25th May 2018

We printed this on the Library's PolyPrinter 229.