3D
360°
Featured Scan The World
1,713 views 104 downloads
Community Prints Add your picture
Be the first to share a picture of this printed object
0 comments

Weighing more than 7 tons, this colossal lion comes from a tomb in the ancient cemetery of Knidos, a coastal city in south-west Turkey.

The tomb stood on the edge of a cliff overlooking the approach to Knidos harbour. The building itself rose some 18 metres, and its pyramid roof was topped by the lion. It is carved of marble brought across the Aegean Sea from Mr Pentelikon near the city of Athens. The lower jaw and front paws are missing, and the eye sockets are now empty. These were once filled, probably with metal or glass, to catch the light.

There were at least 12 individual burial chambers arranged in a circle inside the tomb. These may have served several generations of the same family. Alternatively, because of the shield carved into one of the outside walls, it has been suggested that the tomb held the unknown casualties of a military engagement.

Archaeologists disagree about the date of the tomb and its lion. Some believe it was built 50 years or so after the -ausoleum at Halikarnassos, which dates to about 370-350 BC. Others place it later, in the 2nd century BC. 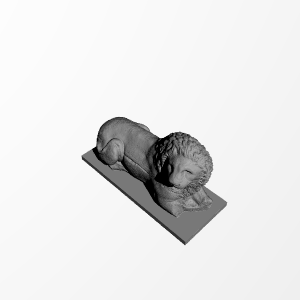