3D
Scan The World
4,211 views 396 downloads
Community Prints Add your picture
Be the first to share a picture of this printed object
0 comments

After a long selection process, the little-known sculptor Alfred Stevens was awarded the commission to produce a monument to the Duke of Wellington. He had already produced a reduced version of his intended monument as his competition model in 1857. This model is also in the Museum's collections (Museum no. 44-1878). This group and its companion depicting Truth and Falsehood (Museum no. 321A-1878) are full-size models for the bronze groups featured on the Wellington monument in St Paul's Cathedral. They were not completed by Stevens until 1866. In this work the draped female figure of Valour triumphantly crushes the struggling figure of Cowardice beneath a shield.

The entire monument comprised of a triumphal arch with the bier and recumbent effigy of Wellington. The colossal figures of Truth and Falsehood and Valour and Cowardice were placed at either side. The monument was not completed until 1912, almost 40 years after the death of the sculptor.

A sculptor, designer and painter, Alfred Stevens (1817/18-1875) rejected contemporary distinctions between fine art and design. From 1850 to 1857 he was chief designer to Hoole & Co., Sheffield, where he produced award-winning designs for metalwork, majolica, terracotta ornaments and chimney-pieces. Perhaps his two greatest works were the decorations for the dining-room at Dorchester House, London (about 1856), for which he made countless drawings inspired by the Italian High Renaissance style, in particular the work of Michelangelo and the monument to the Duke of Wellington for St Paul's Cathedral, London, which was completed after his death. The two allegorical groups from this monument made a lasting impact on the New Sculpture movement.
The influence of the Italian Renaissance is evident in much of Steven's work, and is perhaps best reflected in the Wellington monument. 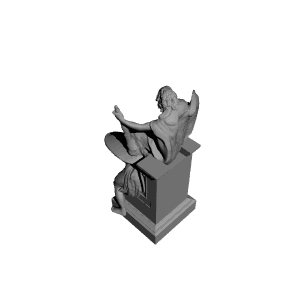 ×
0 collections where you can find Valor and Cowardice von vam