Vase with a Medallion Portrait of Frederick the Great

3D
360°
Scan The World
2,233 views 315 downloads
4 collections
Community Prints Add your picture
Be the first to share a picture of this printed object
0 comments

Vase with a Medallion Portrait of Frederick the Great

Frederick the Great was ruler of the kingdom of Prussia between 1740 and 1786. He was a member of the house of Hohenzollern, a German dynasty who’s members were princes, kings, and emperors of the German Empire, Prussia, and Romania. They took their ancestral seat in Hohenzollern Castle near the center of Germany.

He held the longest reign of any of the Hohenzollern kings between 1740 and 1786, lasting 46 years. During this time, he took several military victories and was a strong patron of the arts. He expanded the Prussian lands and territories greatly, becoming a military power in Europe. The Prussian people knew him as Der Alte Fritz (“The Old Fritz” by the people of Prussia and eventually the rest of Germany.

This large bowl vase has a portrait in relief of Frederick the Great inside the vessel, and has additional ornamentation around the bowl on the outside. The design was likely that of draftsman Johann Wilhelm Meil (1733-1805) in the 18th Century sometime after 1786. 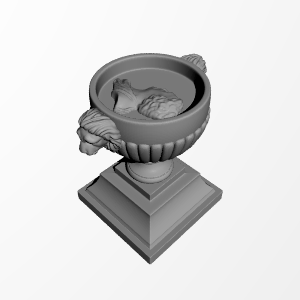