Apollo is a god of many things, including music, and a protector against evil. He is often depicted in a decidedly femininemanner, with soft curves, rounded shapes, and long hair artfully arranged. Even here, where he has just shot his deadly arrows at Python, a female monster, and usurped her temple in Delphi.

Winckelmann was very taken with the figure. He believed that it was so much more perfect than all other original Greek works that it could not possibly be a Roman copy. It had to be a Greek marble original that had been moved directly to Rome. However, the draperies around Apollo’s arm do not follow the same curves on one side as on the other. The error presumably arose when a Roman workshop copied the statue in marble.

The Apollo Belvedere was named after its position in the Vatican, the Cortile del Belvedere. It was admired and frequently copied for almost 400 years before falling out of fashion.

This is a 3D scan of a plaster cast of the sculpture ‘Apollo Belvedere’ attributed to the artist Leochares and dated circa 330 BCE.

The scan is made from the cast (ref. KAS353) in The Royal Cast Collection at SMK – National Gallery of Denmark. 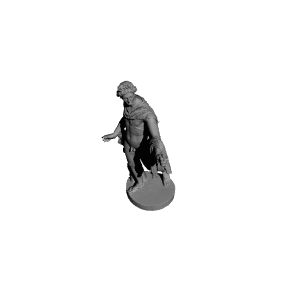