Aule Metele, Latin: Aulus Metellus; also known as The Orator, Italian: L'Arringatore, is a bronze sculpture 179 cm high. It is a Romano-Etruscan work from the late second century or early first century BCE in the Roman style and depicts an Etruscan man, Aule Metele, wearing a short Roman toga and footwear. His right arm is raised to indicate that he is an orator addressing the public.

Scale to size suitable for printer. Clothing gets thin at the lower part of the model, so printing upright can help, or choose an appropriate scale carefully. 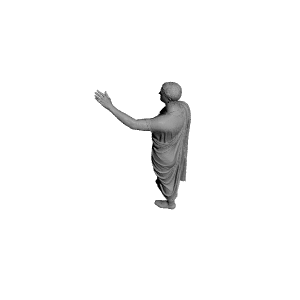