The Brabo Fountain (Dutch: Brabofontein) is located in the Grote Markt (Main Square) of Antwerp, in front of the Town Hall of the city. The ceremonial inauguration of the sculpture took place in 1887. Jef Lambeaux realized the set of the bronze fountain.

The reason is the legend of the name of the city, in which it is said that the giant Druon Antigoon cut off a hand to all the ship captains who moored in the area and refused to pay toll, then throwing it to the Scheldt. The captain of the Roman army Brabo cut off the giant's hand imitating what he had done. The fountain reflects the moment when the Brabo throws the giant's hand into the river. According to this legend, the etymology of the name of the city Antwerp is a composition of the Dutch words "(h)ant" (hand) and "werpen" (launch). 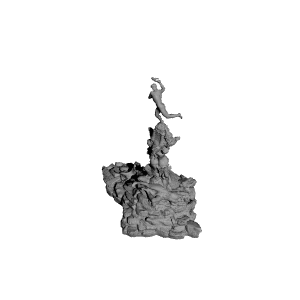