Feast trough in the form of a crocodile

Feast trough in the form of a crocodile

This large crocodile head was used as a feast bowl, presented as a long trough. In the crocodile's mouth is a man's head, and running along the sides of the trough are a series of men.

The late nineteenth century work originates from Kalikongu village, Roviana Lagoon, in the Solomon Islands. In a note filed under British Museum correspondence, 1904, Davis (Admiral Edward Davis, 'adventurer') describes the bowl, "Kiki dish - taken from the Head Quarters of the Rubiana Head hunters in the Rubiana Lagoon Solomon Islands when those villages were destroyed by HMS Royalist in September 1891 -after a raid on neighbouring villages the cooked captives were eaten from this bowl by the captors."

The bowl was published and illustrated by James Edge-Partington (Man 1903 No.91) with an account by C. M. Woodford of a feast at Sisieta in which taro, yams and nuts were pounded in such a bowl to inaugurate it in a martial ceremony. Edge-Partington speculates that Woodford may have been describing the same bowl, but his son Thomas Edge-Partington, a Deputy Commissioner stationed in the western Solomons, contradicts this (Man 1906 No.79) saying the bowl "is from Koli kongo, a village much higher up the lagoon". He added that the Roviana chief "Ingova assured me time after time that they never eat men from the trough; the heads are always there during the ceremony, but no human meat was eaten from it."

Davis, in a letter to Hercules Read of the British Museum (21-22 September 1903) recounts giving the bowl to Lord Charles Scott "on the understanding that he was not to part with it, and that if he even thought of doing so, I was to have the first refusal of it. It would have been a welcome addition to my lot and whoever wanted it would have had to take the whole collection as it is .....isting rare."

In view of this letter, Deborah Waite, reviewing the history of the bowl (2000, Journal of the Polynesian Society Vol.109 pp.120-122) appears mistaken in identifying it with item 325 in Davis' sales catalogue LIST OF ETHNOGRAPHICAL OBJECTS.

The present spelling of the island is Kalikoqu

Temporary Register,1861-1921.1903 register description:
Long wooden trough, cut from solid & painted, one end represents a crocodile head, the other the crocodile's tail clasped by an anthropomorphic figure, whose legs are being swallowed by a shark. 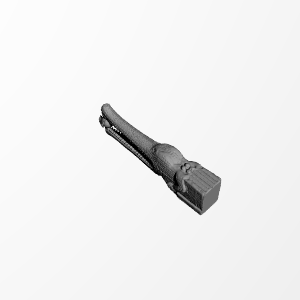 I cut the model in half so I could make a relief from this carving. Then I sliced it and combined the parts with Montini building bricks.