The Iron Throne is the throne upon which the King of the Andals and the First Men sits, located in the Red Keep in the city of King's Landing. Besides the King himself (or Lord Regent) only the Hand of the King may sit on the Iron Throne. The term is also used colloquially to refer to the monarchy that rules the Seven Kingdoms and the authority of the King (e.g. "Rebellion against the Iron Throne").

The current seater is King Tommen Baratheon, First of His Name. The Iron Throne was forged at the order of Aegon the Conqueror, the first of the Targaryen Kings, who conquered six of the seven independent kingdoms of Westeros and unified them under his rule - the seventh kingdom of Dorne was later joined through a marriage alliance. The throne was allegedly forged from the 1,000 swords that had been surrendered to Aegon in the War of Conquest by the lords who had offered their fealty, though the actual number of the swords is less than two hundred. These were subsequently melted down by the fiery breath of Aegon's dragon, Balerionthe Black Dread, then beaten and bent into a throne of imposing appearance. 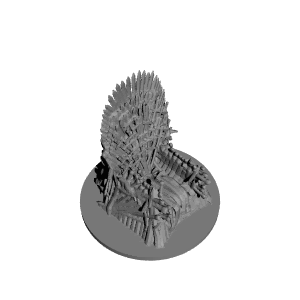 Printed in HIPS with 0.2 Layer toke 7,5hs original scale. Painted with plated airspray No sanding at all On a HE3D TARANTULA Nice model! tks

that was one of my very first prints (not so great print done on 0.2 mm layer height) but i decided to finish it paint it lately