The sitter was the wife of Pajou's lifelong friend Charles de Wailly, a companion from student days in Rome. De Wailly, court architect to Louis XVI, had built neighboring houses for Pajou and himself, and Pajou executed busts of the architect and his wife. After her husband's death, Madame de Wailly married M. de Fourcroy, a medical doctor and chemist.

The portrait of Madame de Wailly displays the sculptor's gifts to best advantage. The solidity that characterizes his work is enlivened by an equally characteristic linearity, resulting in a brilliant eighteenth-century version of a Roman matron's portrait. The sense of dignity does not suppress the spirit of humor and intelligence that radiates from Madame de Wailly's fully mature countenance. This maturity is echoed in Pajou's handling of her torso, emphasized by the clinging cloth that partly exposes her chest and ample shoulders. The sinuous, weighty curls that frame her face and cascade over her shoulders are insistently sculptural, lending harmony and equilibrium to the work. 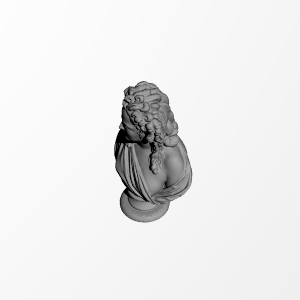