John Gibson was born in Wales and originally trained in Liverpool, but in 1817 he left Britain for Rome, where he was to spend most of the rest of his life. He greatly admired the Neo-classical sculpture of Antonio Canova, as well as the work of the Danish sculptor Bertel Thorwaldsen. Both these artists were established in Rome at the time of Gibson's arrival, and gave him advice and assistance. Gibson nevertheless continued to exhibit work at the Royal Academy in London, and was elected a Royal Academician in 1838. During the late 18th and early 19th centuries many British artists lived in Rome, and visiting dignitaries making the Grand Tour often commissioned or bought works from them there.

The Pandora epitomises Gibson's Neo-classical purity of style. The classical subject, posture and dress, as well as the smooth surface of the marble, are all typical of his work, and reveal his debt to Canova and Thorwaldsen. Pandora is portrayed about to open the box that, according to Greek myth, released all the sorrows of the world. The gravity of her expression seems to express a sense of foreboding at what she is about to do. Gibson made more than one version of this sculpture; the Museum's example - signed 'IOANNES GIBSON ME FECIT ROMAE' - was given by a Mrs Penn, and it must therefore be the one formerly owned by a Mr Penn, mentioned in a biography of Gibson written by Lady Eastlake in 1870. Another version is at the Lady Lever Art Gallery at Port Sunlight in Merseyside.

Pandora was the first woman, created by Hephaestus and Athena, on the instructions of Zeus. Each god and goddess endowed her with a special quality. Pandora was designed to bring men misfortune. In his Works and Days Hesiod recounts that Zeus sent Pandora to Epimethus, who was seduced by her beauty and made her his wife. Pandora opened the lid of a great pot (Pandora's box) which released all the ills in the world. Hope alone remained inside. In Christian thought she was seen as the pagan counterpart of Eve.

In Greek mythology Pandora was the first woman on earth. Jupiter gave her a box with a strict instruction not to open it. Nevertheless, she did so and all the evils and misery contained in the box were released upon mankind. This marble sculpture was carved by John Gibson (1790-1866) who spent more of his working life in Rome and was a great admirer of Canova.

The Pandora myth first appears in lines 560–612 of Hesiod's poem in epic meter, the Theogony (ca. 8th–7th centuries BC), without ever giving the woman a name. After humans received the stolen gift of fire from Prometheus, an angry Zeus decides to give humanity a punishing gift to compensate for the boon they had been given. He commands Hephaestus to mold from earth the first woman, a "beautiful evil" whose descendants would torment the human race. After Hephaestus does so, Athena dresses her in a silvery gown, an embroidered veil, garlands and an ornate crown of silver. This woman goes unnamed in the Theogony, but is presumably Pandora, whose myth Hesiod revisited in Works and Days. When she first appears before gods and mortals, "wonder seized them" as they looked upon her. But she was "sheer guile, not to be withstood by men." Hesiod elaborates (590–93):

From her is the race of women and female kind:
of her is the deadly race and tribe of women who
live amongst mortal men to their great trouble,
no helpmates in hateful poverty, but only in wealth.

Hesiod goes on to lament that men who try to avoid the evil of women by avoiding marriage will fare no better (604–7):

He reaches deadly old age without anyone to tend his years,
and though he at least has no lack of livelihood while he lives,
yet, when he is dead, his kinsfolk divide his possessions amongst them.

Hesiod concedes that occasionally a man finds a good wife, but still (609) "evil contends with good." 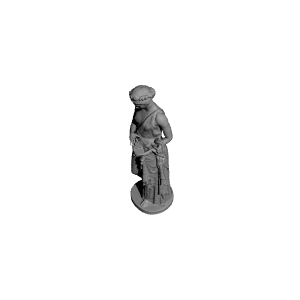 need to be careful on fingers. nicely scanned object.

Printed on Hatchbox White at 0.14mm

Getting to my Greek Mythology statues. She is 5" tall, using Amolen marble like filament. Thank you for this scan!